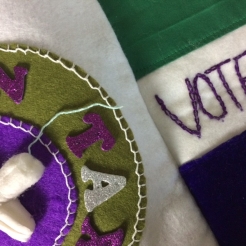 Deeds- Too excited …. ! As you can see from the teaser images we really got cracking on the making front today with the fantastic group of women (oldest participant 98), children (who put on a short play), dog (who mainly slept) and even a man (providing the gender balance!)) at Quatt Village Hall . The inventiveness, ideas and making skills of everyone was inspiring. 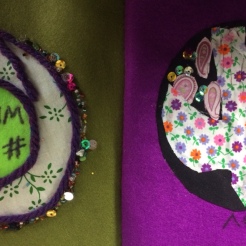 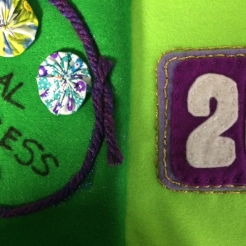 Words – The group really identified with the issues and ideas that they were making into mini art pieces and as I went round the hall there really were the most fantastic conversations going on about so many aspects of being a woman today. 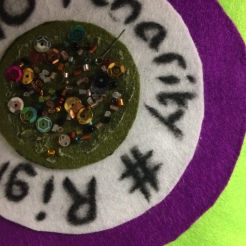 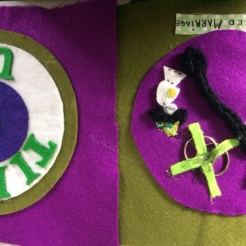 Togetherness–  At the end of our day when we all took a look at what had been accomplished we had the opportunity to say a few words about the project and several ladies said they had been a bit worried walking into the hall and taking part and had felt a tad wary about what they were going to be doing. But after sitting together creating, crafting, chatting, chomping (on the fabulous cakes- thank you!) they said they had not only enjoyed the involvement but also made new friends, felt empowered, had an enjoyable time, wondered where the time had gone and had felt part of a very busy and motivated group. Arts for health and well being at its best ! 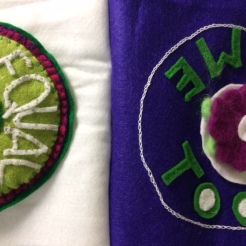 I had started the session by telling the group a little about a talk I attended by Helen Pankhurst (granddaughter of Sylvia) and how she not only drew from the past but linked what is happening today as another phase of women finding their voices and not being prepared to accept the unacceptable. She finished her talk by saying she wants everyone regardless of gender, race, creed to be allowed to shine. I can think of no more fitting words to describe everyone today – each and everyone of you truly did shine ! x

My Art- A stratigraphy of paint in which a history of the artists actions are condensed in a single remaining image. The process being one of decision making, mark making, covering, uncovering, adding, burying, scraping away and finally revealing or hiding. View more posts

2 thoughts on “Deeds,Words (a lot of words!) and Togetherness.”